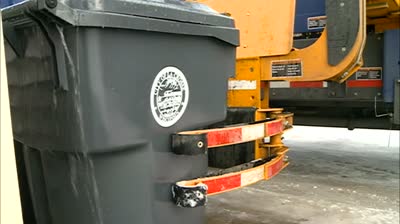 Trash day can be tricky. It can be hard to keep all the rules straight. Here is some information from WKBT-La Crosse:

Both Onalaska and La Crosse are in the process of rolling out a new way to get rid of your garbage, and along with the new process come need-to-know changes for residents.

Harter’s Quick Clean-Up company is contracted with both cities for automated trash pick-up. Onalaska launched its program at the start of January, and La Crosse has just begun to set out the new bins for its residents. It’s a slow-going process that city officials say will get more efficient over time, as residents become more accustomed to it.

Placement of the new bins is the most important. The carts have to be three feet apart. Don’t put them right next to your garage or too close to a car, buildings and light poles.

Full implementation of the program in La Crosse is scheduled for the beginning of February, once all city residents have received their new bins. Starting on the first Monday of next month, garbage trucks will no longer empty old garbage cans – they’ll only be picking up the new ones.

If you’re looking to get rid of your old garbage cans, you may leave them out on recycling day for Harter’s to pick up. City officials say to make sure you mark them with a sign so drivers know which can to throw away.

La Crosse was finally recognized for how awesome it is. The Movoto blog  named La Crosse the second most exciting small town, behind Hoboken, N.J.

Here’s what they said:

We know what you’re thinking: How can a town situated in the shadow of “Grandad Bluff” be exciting? Well, the numbers don’t lie. Numbers like five, which is the place La Crosse took when it came to nightlife, and we’re sure regulars at places like Bodega and the Starlite Lounge would agree if we could get them to put down their glasses for a second.

La Crosse also posted great numbers when it came to active life and having a young population. It ranked 20th for the former and 11th for the latter, with 33 percent of its residents falling in our exciting age group of 20 to 34.

With Oktoberfest happening in a couple days, here is a quick history about one of the largest events in La Crosse thanks to Oktoberfestusa.com:

Approximately 5,000 miles and over 150 years of history provide the only major differences between La Crosse, Wisconsin and Munich, Germany during early October each year. The first few days of the tenth month in both Munich and La Crosse are filled with “merrymaking” and a carnival atmosphere known in both cities as Oktoberfest.

One of the achievements which helped La Crosse gain a 1961 All-American City Award, Oktoberfest, USA, is one of the few authentic Old World folk festivals held annually in the United States. Each year, numerous local industries, civic and fraternal groups plus hundreds of area residents, working on a voluntary basis, combine their efforts with those sponsoring La Crosse Festivals, Inc., in developing and presenting the annual autumn festival.

Origins Of Oktoberfest In La Crosse

The first Oktoberfest, USA, was held on October 13, 14, and 15, 1961…but the planning began many months before. In early 1960, civic leaders had agreed that La Crosse needed a community wide activity of some sort. The city had been without such an event since 1921. Because that earlier celebration had been a winter carnival, many of the leaders were in favor of renewing this idea as a La Crosse tradition.

However, there were problems involved with holding a winter event on the same dates each year. First, as we all know, it is virtually impossible to predict the winter weather in Wisconsin from day to day, much less a year in advance. Second, assuming the worst, the costs of providing artificial ice and snow were prohibitive. Finally, there were several winter carnivals in the area, including the internationally known St. Paul Carnival. The proximity of Minneapolis and its highly successful summer festival, Aquatennial, tended to rule out a similar event. Although neither festival was completely dismissed, it was agreed upon that a fall celebration was the best answer.

During the fall of 1960, several officials of the La Crosse based G. Heileman Brewing Company were also discussing an annual promotion. News of these discussions spread through the firm, eventually reaching the malt house, where two of the employees of German origin suggested an autumn festival similar to the Oktoberfest held annually in Munich. The idea was quickly accepted, for two primary reasons:

October is the time of color, as the leaves change from summer green to the brilliant fall colors.

Early October usually marks the end of the harvest and the preparation for winter. It was believed that a festival at this time would provide an ideal “relief valve.

As the idea for an Oktoberfest grew, it quickly became apparent that there would be much more to do than could be handled by a single firm. It was agreed that the Oktoberfest should be a completely civic enterprise. Early in 1961, brewery officials contacted the La Crosse Chamber of Commerce and proposed the idea to chamber members. It was accepted, and both agreed that the chamber would act as the sponsoring organization.

An Oktoberfest Committee was established to oversee the proposed annual celebration. This committee set forth five primary objectives for the fall festival:

to promote “tourism” to La Crosse and the Coulee Region

to involve a large number of people

to break even financially, while remaining a non-profit organization

The almost unbelievable growth of Oktoberfest, USA, since that first year has made reality of all the objectives.

It was conceived as a holiday for the community and accepted by the community on those terms. In 1962, the name “Oktoberfest” was registered with the State of Wisconsin. In 1963, “Oktoberfest, USA” was registered and listed as a trademark with the federal government. In 1965, the newly-formed La Crosse Festivals, Inc., purchased the assets of Oktoberfest from the Chamber of Commerce and became the sponsoring organization.

Everyone have a safe festival!

When I was walking around Target the other day, the school supply display took me by surprise.

Is it really the end of July? Is it already time for the school supplies to come out?

I can’t believe it and I’m sure there are many kids that don’t want to believe it, but, new pencils, pens, folders and notebooks are in their future.

Here’s a little crystal ball of sorts in the form of some local districts’ school supplies. If there is a list that we are missing (for example, the Sparta School District), let us know!

School of Technology and Arts

Good luck to those new students!

The sun is shining, temperatures have risen and sounds of a jackhammer fill the air. It’s construction season.

It’s definitely not fun to sit in stop-and-go traffic along a busy interstate for 30 or more minutes, but that’s better than driving on too-narrow roads that have potholes the size of dining room tables.

There are many projects going on around the area, some that seem to pop up out of nowhere. Orange is definitely the color of the season.

The biggest one is the Interstate-90 bridge work (timeline below) heading into Minnesota.

Here are some more helpful links:

The 5 largest summer construction projects (via the La Crosse Tribune)

Until it ends, here are some quick tips:

Hope everyone gets through the frustrating season safe and sound!

The La Crosse Fine Homes Group was delivered good news in terms of housing numbers as the the Wisconsin REALTORS Association released the June 2013 housing statistics for the state.

La Crosse County had a busy month. Home sales skyrocketed while the median home price continued its up-and-down trend, but it’s all good news as the housing market is recovering.

All regions of the state saw healthy growth in home sales through the first six months of 2013 over last year. The regions with the strongest growth were the South Central, up 15.7 percent; the West, up 13.4 percent (that’s us!); and the Southeast, up 12 percent. Growth in the other three regions was also solid, ranging between 9.9 percent for the Central region and 7.3 percent for the Northeast region, to 6.9 percent in the North.

Specifically, June was a busy month for home sales in La Crosse County, which is usually how it is, but compared to last year, real estate agents were taking care of business in 2013. Not even the rainy months of March and April stopped buyers from getting out in the market.

As far as Monroe, Trempealeau and Vernon counties, numbers have been business as usual.

Here’s a look at the region:

According to the WRA’s press release, Wisconsin home sales rose an  11.4 percent in the first six months of 2013 compared to last year. In June alone, Wisconsin home sales were up 3.1 percent relative to last June, posting the 24th straight month of positive sales growth in the state. Median prices also continued to increase year-to-date, rising 7.7 percent to $140,000 compared to the first half of 2012. In June, prices were up 12.3 percent to $159,500 compared to June 2012.

The high prices aren’t a bad thing for affordable housing, as homes in Wisconsin remain a good value. The Wisconsin Housing Affordability Index (HAI) showsthe percent of the median-priced home that a buyer earning the estimated median family income can afford to buy, assuming current mortgage rates and a 20 percent down payment. In June, the index was at 214, indicating that a household with median family income of $63,100 can afford to buy 214 percent of the median priced home of $159,500. This is down from 239 in May and significantly below its peak of 292 in January of this year.

Were you one of the recent home sellers/buyers?

Like Loading...
Hello!
Morgan here.
A couple weeks ago, my husband and I hiked around Grandad Bluff. I was so excited to get out and explore the area more. We prepared by putting on our sunscreen, hydrating, and spraying with bug spray.
We have driven up the bluff many times for the beautiful view and Ben has rode his bike up, but this time we wanted to hike up.

We ended up not finding one trail, but a lot of little bluffside hiking trails. Some of them are not easy and can become very scary for the average hiker, however, there are a fewbeginner level trails that have a nice overlook that is different from the main one at the top.

There were also many brightly colored flowers along the trail!

The bluff is beautiful and being deep into the wilderness really puts you at peace. After a few hours of being adventurous I was exhausted so Ben gave in and we left the bluff for the day.
Then we went to our new favorite local ice cream shop, Ranison Ice Cream and Candy in La Crosse. They have amazing hand dipped ice cream in all different kinds of flavors. We treated ourselves to our choice along with a locally brewed root beer. We come from a small town and we love the small town hidden gems in the area. Overall, we enjoyed ourselves and had a fantastic Sunday. We are excited to keep trying new hiking trails.
If anyone has any suggestions feel free to contact me!
Morgan
La Crosse Fine Homes Group of Keller Williams Realty

Take a look around